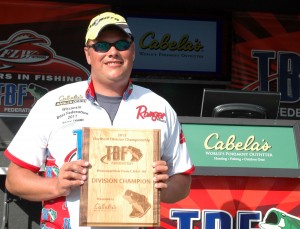 La Crosse, Wisc. (Sept. 7, 2012) – The race was tight between the top three finishers this week at the 2012 TBF Northern Division Championship, presented by Cabela’s. La Crosse native and Shawano High School business and marketing teacher, Ben Otto made a clean sweep on his hometown waters this week on the Mississippi River and was named the 2012 TBF Northern Division Champion today. He finished strong bringing in 16 lbs 2 oz today to finish out the week with a 3 day total of 47 lbs 8 oz.

“Today was a pretty good day. I had saved a few spots for today and they were loaded. We caught a lot of big fish, almost 27 lbs between my non-boater and I. 80-90% of my fish came on a jig. I was using a jig from Bob’s Bait & Tackle from here in La Crosse. I caught some of my bigger largemouth this afternoon on a homemade jig. It was great to be home, nice to be back with family and win this tournament on my home waters,” said Otto.

He finished the tournament having tied for the overall tournament big sack with 17 lbs the first day. Otto was awarded daily big bass award yesterday with his 4 lb 12 oz large mouth. He was also the Ranger Cup winner of $450 by being the highest finishing Ranger Cup qualified angler enrolled in the program for TBF members. Otto will be advancing for the state of Wisconsin as a boater next spring to the 2013 TBF National Championship. “I’d like to thank my principal and superintendent for allowing me to have off the first week of school to be here for this tournament. Now I’m hoping they will be giving me a week off next spring for the National Championship!”

Finishing in a close 3rd place was Wisconsin’s Chad Richardson with 41 lbs 2 oz. Richardson was the recipient of the tournament’s $500 Cabela’s Angler Cash contingency award. It is awarded to the highest finishing TBF member who is enrolled in the program. It is free to all TBF members and takes just a few minutes to register online. Richardson will advance to nationals as a co-angler for Wisconsin.

Making a great comeback, after battling a tough first day with penalties, Indiana’s Walter Wynn finished the tournament in 2nd place overall and advances as a boater for the always tough state team. Walt stayed with it and finished strong with a 14 lb 5 oz bag today, making his 3-day total 42 lbs 8 oz. “I had an average day again today. I caught all of them cranking, on

the main current flow at the end of a spillway,” said Wynn. This is his third time on the Indiana state team and this time, it was his time to win. He has been the man to beat in Indiana and now he has qualified for the TBF National Championship. “I’m pretty excited to be able to carry my boat and be exposed to the next level of competitive bass fishing.” Wynn’s teammate Rob Kelley advances as a co-angler. He had an impressive day today weighing 17 lbs, tying him for the tournament big sack. He finished 5th overall with a 3-day total weight of 39 lbs 10 oz.

Having very impressive finish and big bass of the day was Michigan’s Bill Simpson who weighed in 16 lbs 12 oz and kicker that weighed 4 lbs 15 oz. That bass ended up being the biggest bass of the tournament. Wisconsin Bass Federation sponsored the daily big bass award with the winner receiving a customized jersey made by Atomic Bass Jerseys in La Crosse. “I had my best day today, caught them all flippin’.

I’ve only been bass fishing for 5 years and this is my first state team,” said Simpson. Simpson won his state with a 3-day total of 39 lbs 3 oz and advances as a boater. “I’m pretty excited and pumped to be fishing in the Nationals next year!”

In the state team standings, it was no surprise, Wisconsin dominated the entire week and finished the tournament besting the Ohio team by almost 50 lbs. They finished the tournament at 434 lbs 4 oz and were awarded the Northern Division ‘Cup’ for the year, as well as much-deserved bragging rights. Even though Ohio made a strong comeback today, it wasn’t enough after Wisconsin’s 50 lb lead yesterday. “I am really not surprised by the results, as the host state should win their own tournament. I’m very proud of my guys, they worked as a team at the team meetings every night. Team Captain, Andy Ritchie always keeps everything flowing smoothly and emphasizes the importance of teamwork. I’d also like to congratulate Ben and Chad and look forward to spending the week with them next spring at the TBF

The top angler in state team standings advances as a boater and the 2nd place angler of each state advances as a co-angler to the 2013 TBF National Championship next spring. There they’ll fish for the “Living the Dream” prize package to include paid entry fees as an FLW Pro for a year with use of a wrapped Ranger boat and Chevrolet truck, as well as, thousands in cash and prizes.

2013 National Championship Contenders for the Northern Division are as follows:

“We hope all the anglers had a great time in Wisconsin. I’d also like to congratulate all the National Contenders from each state and look forward to seeing them there. The Wisconsin Bass Federation would also like to thank Donnie, Norm and Tisha for all their hard work, the City of La Crosse Tourism Bureau and Days Inn Hotel,” Simonds added.