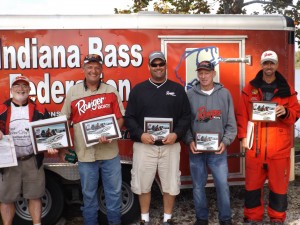 The 2013 Indiana Bass Federation Invitational Trail’s Forrest L. Wood Classic was a great success at Patoka Reservoir this past weekend. The rain put a damper on some of the activities but everyone great time. 47 Anglers and 47 Co-Angler from all over Indiana and a few from Ohio fished IBF events all year to qualify for the Classic.  The top 40 in each division of the Invitational Trail and the the top two from each of the 7 Top 8 tournaments were invited. Two days of fishing with on and off rain both days. Serious driving rain over night on Saturday slowed to a light drizzle for the Sunday take off. The rain cleared late in the afternoon and held off through the weigh in.

Paul Jolly of Salem who is also a previous Classic winner finished fourth with 21.86 taking home $840.00

Jerry McConnell of Plainfield had a very solid year and he capped it off with a third place in the Classic. Jerry weighed in a total of 17.17 lbs and he walked away with $636.00

Chales Fox of Austin was our Co-Angler of the year and he had a good classic finishing in fourth. Charles had 5 fish total weighing 16.78 lbs.  He won $424.00 for his efforts.

I want to again thank all of the sponsors and supporters of the Indiana Bass Federation Invitational Trail. With their help we awarded over $24,000 in cash and prizes at the classic. Their donations and support help pay for expenses through out the year. They also donate to awards and prizes.

Proud to be your tournament director,