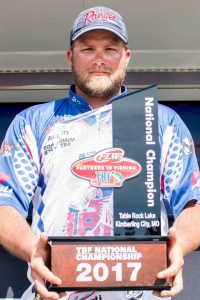 FLIPPIN, ARK. (April 12, 2017) Ranger Boats Pro Allen Boyd beat a field of 253 anglers to win The Bass Federation 2017 National Championship at Table Rock Lake on April 7. The angler fought through a tough bite for five days to win the “Living the Dream” package. The angler also participated in the Ranger Cup program and took home a brand new Ranger Z518.

“I knew the fish were there. I just didn’t let it rattle me too bad,” said Boyd about his slow start. “I started throwing the square-bill more. I knew I needed to cover more water, so I went up there with that mindset.”

On the beginning of the second day, Boyd noticed the current from the dam discharge, which wasn’t evident in practice or the first day due to high winds.

“I noticed that some of the points you could see the current coming over them,” said Boyd. “It was a pretty strong current. I was up there with another competitor and we both caught fish really fast. Once the visible current slowed down, the bite got a whole lot tougher.”

With this newly found key information, Boyd rebounded on day two with 10 pounds, 15 ounces and placed 25th to qualify for the final three-day stretch. The field of 253 was cut down to 49 for day three and with all anglers starting with zero weights. Each angler was also provided a fully loaded Ranger Z520C with an Evinrude E-TEC G2 250 outboard.

“That 520 is a great boat,” said Boyd. “There’s not a better boat on the market, that’s for sure. There was one day where the wind really blew and that lake got pretty rough. I’ve been in many different boats over the years and when you get back in rough water, that’s the boat to be in.”

Boyd hit a home run on day three, bringing 17 pounds, 14 ounces to the scales. However, the fickle fish stumped Boyd on day four with the angler weighing three fish for 8 pounds, 2 ounces. The slim bag as enough for Boyd to top his fellow Northern Division competitors and qualify for the final day of the championship.

“It’s a mental game and most people don’t understand that,” said Boyd. “There are so many things that go through your head especially on the final day of the TBF championship. There are a lot of decisions that have to be made. I just tried to bear down and focus and fish as hard as I can and at the same time cover water.

Boyd fished a four to five mile stretch around Crooked Creek Marina all five days. The angler relied heavily on two main baits – a Texas-rigged Hawgback tube and Strike King KVD square-bill crankbait, both the 1.5 and 2.5.

Boyd went into the final day with a swing-for-the-fences attitude.

“It was going to be hero or zero up there,” said Boyd. “I knew that guys were catching a lot of spots up there and bringing in 12- to 13-pound bags. I was going up there trying to get the big largemouths.”

Boyd’s go-big-or-go-home plan worked to his advantage and landed the angler a five-fish limit of 12 pounds, 10 ounces to win the 2017 TBF National Championship title.

“It really hasn’t all sunk in quite yet,” said Boyd. “I’m excited and nervous all at the same time.”

With the win, Boyd became the first angler to win two TBF National Champions. The grand prize for winning the event is the “Living the Dream” package, which is a bundle of prizes and cash aimed to help an amateur angle transition from a weekend angler who works full time to making fishing a full-time job.

The “Living the Dream” package includes a cash prize, fully paid entry fees on the 2018 FLW Tour as a pro, travel expense stipends for each event, and use of a “Living the Dream” wrapped Ranger boat for the year. Although Boyd first won the package back in 2011, he was unable to make the jump to the pro level.

“This is really something I would like to do for a living and the first time it didn’t work out when I won,” said Boyd. “It’s so hard to give it 100 percent and keep a job at the same time. The ‘Living the Dream’ package will take a lot of the stress out of it by knowing that all of your entries are paid and what money that you do make gets to go into your pocket. It helps a bunch. I’m going to do the best I can to make it happen.”