(Syracuse, IN) Despite the wind, rain, and storms the 2022 Riley Children’s Foundation Benefit Tournament at Lake Wawasee was a success. Even with threating skies sixty-nine boats entered the tournament which benefits the Riley Children’s Foundation. Forty-nine teams weighed in five fish limits. In all 282 fish were weighed in for a total weight of 527.88 pounds, Jeff Showalter (Goshen, IN) and Andrew Miller (Bristol, IN) won with five (5) bass weighing 12.20 pounds. They caught their two largest bass in channels early and when the shallow bite dried up they caught the balance of their fish in deeper water on bluegill-colored jigs. In addition to $1500, they each received a Lew’s baitcasting reel curtesy of Ye Olde Tackle Box of North Webster. Finishing second was locals Troy Thornburg (Syracuse, IN) and Chase Jacobs (Warsaw, IN) with 12.09 pounds which earned them $950.  Danny Abrams and Nicole Foor of Greensfork, IN weighed in 11.71 pounds for 3rd place. They won $580 plus another $100 from the Fraternal Order of Eagles for the highest placed male/female team. Clint Brown and Kaden Wagomon of Angola, IN were fourth with 11,62 pounds which was worth $450. They also claimed the Indiana Farm Bureau Insurance Big Bass Award that paid $1000. The largemouth bass weighed 4.71 pounds. They caught the fish on a drop shot using a Zoom bait in 25 foot deep water. Fifth place was Dalton Mollenkoph (Pendleton, IN) and John Mathews (Anderson, IN) with 11.71 pounds which paid $300.. Coming in 6th with 11.05 pound and winning $240 was David Goodman and Greg Silberg (Auburn, IN). Goodman, from Franklin. IN was also awarded an additional $150 by claiming the Trailmaster Long Haul Award for driving the furthest, 172 miles, to fish the event. Rounding out the top ten were; 7th Ron Fabiazak (South Bend) and Kevin Fletcher (Elkhart) 10.86 pounds; 8th, father son team of Chris and Joe Howe (Mishawaka), 10.65 pounds; 9th, John Gibson (West Lafayette) and Chris Iodice (Plainfield), 10.60 pounds; and 10th Kevin Jones (Goshen) and Bryce Amberg (South Bend, 10.49. Nine-year-old Hunter Summerlot won the $50 Fraternal Order of Eagles Young Angler Award. The benefit tournament raised $4,000 which was donated to the Riley Children’s Foundation to benefit Camp Riley, a camp for children with disabilities. 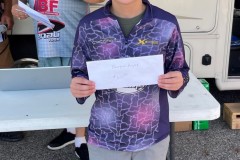 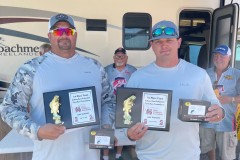 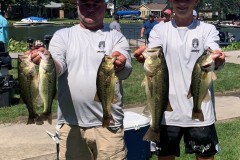 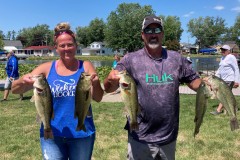 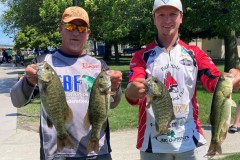